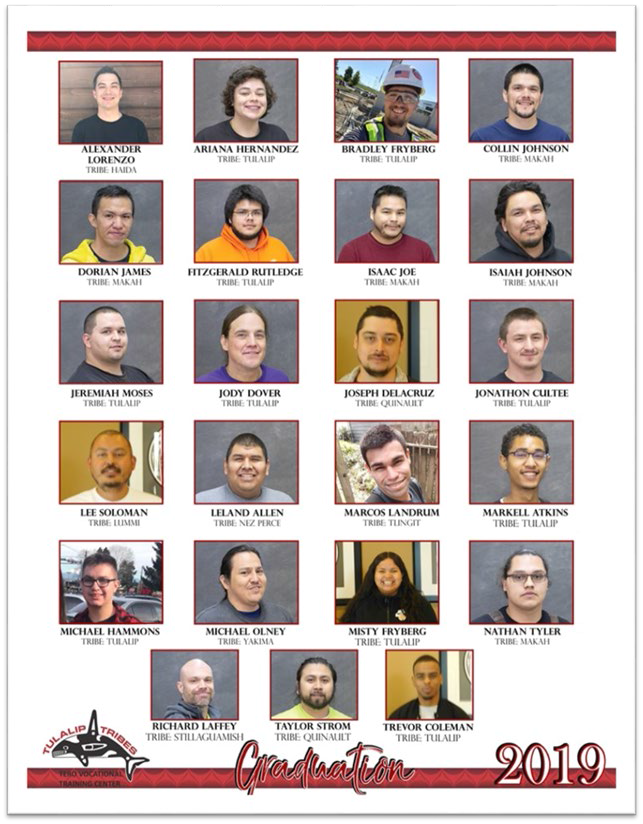 Educators, parents and others often place strong emphasis on college preparation and earning an Associate's or Bachelor's degree by traditional means. But that lengthy and expensive route often means accruing a ton of debt just to enter a highly competitive job market. College degrees may be the preferred goal for many, however there are a growing number of students who see a more hands-on future for themselves. For these individuals unafraid of getting their hands dirty and learning the true meaning behind a hard day's work, there are abundant opportunities available within the construction industry.

Whether it be laborer, carpenter, ironworker or heavy equipment operator, there are countless openings for work and advancement within construction trades, especially for sought after minorities, like Native Americans and women. A major access point for entry into the construction trades for tribal citizens and their families continues to be Tulalip's own TERO Vocational Training Center (TVTC)."Not everybody wants to be a doctor or lawyer. Not everybody wants a desk job. I'm a lifetime fisherman that started a construction company when it became apparent we could no longer sustain ourselves simply by living off the land," said Tulalip Vice-Chairman Glen Gobin. "Some want to be outside working with their hands. That's what brings people to our training program, it gives them an opportunity to get exposure to all the different trades, learn how to function on a job site and how to get work. Graduates of TVTC enter a section of the workforce that is in high demand." In fact, look around the greater Seattle area and you'll see more cranes than you can count. Along the I-5 corridor, from Tacoma to Everett, construction projects are booming and many on-site jobs continue to go unfilled. While other career pathways may be oversaturated and hard to come by, the construction trades are thriving. According to the U.S. Department of Labor, open construction positions are expected to increase by 700,000+ jobs nationally through 2026, a faster growth than any other occupation.

Bright horizons and a variety of prospects gave all the more reason to celebrate the TVTC spring cohort's immense achievement. On Thursday, May 23, twenty-three students were honored with a graduation banquet for their commitment to building a better future. Nearly 150 guests attended, including trade union representatives, several construction employers, and many cheerful family members. "We are such big and enthusiastic supporters of this program for a number of reasons," explained Sound Transit CEO and guest speaker Peter Rogoff. "Right now, we are building the largest transit expansion program in the United States. We'll be spending in excess of $60 Billion over the next 25 years. There are huge opportunities for folks coming out of trades programs, like TVTC, to begin careers with local contractors. There will be well-paying jobs for graduates of this program for a very long time." As far as we know, the TVTC program is the first and only state and nationally recognized Native American pre-apprenticeship program in the country. The program is accredited through South Seattle Community College and Renton Technical College, while all the in-class, hands-on curriculum has been formally approved by the Washington State Apprentice and Training Council.

The sixteen-week program provides 501-hours of hands-on instruction, strength building exercises, and construction skills that can last a lifetime. In addition, students are trained and awarded certifications in flagging, first aid/CPR, industrial fork lift and scissor lift, 40-hour HAZWOPER, and OSHA 10-hour safety. Of this latest graduating cohort, ten students are Tulalip tribal members, five are Makah, two are Quinault and the remaining six are other Native. Homegrown citizen Bradley Fryberg opted to take the class to jumpstart an all-new career path as an electrician, not just for himself but for all those who come after as well. "The TVTC program couldn't have helped more to jump start my career by giving me the necessary tools, showing me how to be the best employee/apprentice I can be, and, most importantly, by assisting me gain direct entry into the electricians union," reflected Bradley. His instructors noted he was the first in his class to gain employment and he's the first TVTC graduate to ever gain direct entry as an electrical apprentice. "Currently I'm working for Sundancer Electric at the new Q parking garage. I'm truly loving what I do for a career."

Along with gaining a wide-range of new employment opportunities via the trades, seven diligent students took advantage of the educational aspect and earned their high school diploma. Two hardworking Tulalip ladies were among the graduates, Ariana Hernandez and Misty Fryberg. Both wanted to acquire a new skillset while creating a pathway to a better and brighter future. "When I first signed up for the class it was because I heard you could learn a lot of skills and earn your high school diploma at the same time," shared 20-year-old Ariana. With credits earned during the sixteen-week program, she earned her H.S. diploma and has already gained employment as a flagger. "Furthering my education has always been important to me. It was a great opportunity to better my math skills and learn basic carpentry work. I can think quicker and gained a lot of skills to use in my everyday life." Some graduates journeyed much further than others in order to be in the much heralded construction trades program, like Leland Allen (Nez Perce). Leland is a single father of three whose home resides on the Nez Perce Reservation in Idaho. He relocated all the way from Idaho in the hopes of building a better tomorrow for his family. "My auntie Judy Allen completed this class a while back, her son just graduated last year, too, and they both spoke fondly of their experience. So I decided to apply and, after getting accepted, came over," Leland said. "Over the last sixteen weeks I've added more skills to my resume and became more valuable in the construction field. My immediate plans are to go back home where there is a big highway project and opportunities for me to do carpentry and iron work."

With hundreds of skilled-trade workers retiring every day across the state, the construction industry is in need of the next generation workforce to help build an ever-growing Snohomish County and surrounding communities. In the Seattle-Bellevue-Everett area alone, construction employment increased by 6,400 jobs between March 2018 and March 2019, according to the Associated General Contractors of America. These are well-paying jobs that are available to people straight out of high school. It takes some grit for sure, but for those folks with a strong work ethic and can-do attitude, they can find themselves running a construction company of their own someday.

"When our student graduates go out into the world of construction, they can compete on equal footing with anybody," declared instructor Mark Newland during the graduation ceremony. "We're gaining traction with union companies and construction employers all over the region. I just can't say enough about this class. From day one, they were engaged, helping each other out, and understood what they had to gain by putting their nose to the grindstone. "This class set a new record," continued Mark. "We have thirteen people who are either working currently or going to work in the next 5-10 days to good, family-wage paying outfits. Amazing stuff! They've given me so much as their instructor and I wish them all the best."